Radiographic Testing (RT) is the method of inspecting materials for hidden flaws by using the ability of short wavelength electromagnetic radiation (high energy photons) to penetrate various materials. The radiographic film detects the radiation and measures the various quan-tities of radiation received over the entire surface of the film. Discontinui-ties in the material affect the amount of radiation bei ng received by the film through that particular plane of the material. Radiography can be used on most materials and product forms, e.g. welds, castings, composites etc. 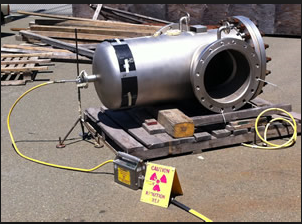